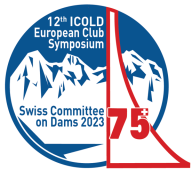 The Swiss Committee on Dams is happy to invite you to the 12th ICOLD European Club Symposium, which will be held from the 5th to the 8th of September 2023 in Interlaken.

Joining us will be a great opportunity to participate in the festivities around the 75th anniversary of the Swiss Committee on Dams, founded in 1948. Today, new and unexpected challenges arise for Europe’s large array of existing dams, and fresh perspectives on the development of new projects for supporting Europe’s energy transition have emerged. These new challenges are at the core of the themes proposed for development during the Symposium.

The 75th anniversary of the Swiss Committee on Dams will give an excellent opportunity to not only draw from the retrospective of Switzerland’s extensive history of dam development, but to also reveal perspectives on the new role of dams for a safer energy transition. This will be particularly commemorated in the Swiss Day sessions.

A series of workshops in various domains of dam design and safety will be proposed prior to the Symposium .A field visit to the construction site of the new Spitallamm double curvature arch dam will give a flavour of the challenges related to the construction of a new structure at the foot of an existing one. We are eager to meet you in Interlaken in 2023!

< Back to General Events