Paradise Dam is located on the lower reaches of the Burnett River around one hour inland from Bundaberg in Queensland. Named after a goldrush town, the site of which has been flooded by the lake, the dam catchment is one of Queensland’s largest at 33,000km2 (about half the size of Tasmania) and contains several significant water storages including Bjelke Petersen, Boondooma and Wuruma Dams. The dam (see Figure 1) is a Roller Compacted Concrete (RCC) type with a primary spillway length of 315 metres. A secondary spillway for high flows is located on the right abutment. As part of investigations relating to Sunwater’s Dam Improvement Program (DIP) (upgrades to comply with State requirements around Probable Maximum Flood), it was identified that the shear strength of the RCC lift joints may not be sufficient to withstand an event similar to the 2013 flood in the catchment, estimated at a 1:200 annual exceedance probability (see Figure 2). 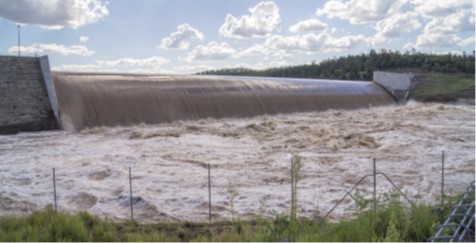 The dam was originally constructed by placing and compacting RCC in horizontal layers, approximately 310mm thick, with lift joints between each layer of RCC. The dam sustained damage in the 2013 flood, with emergency and interim flood repairs conducted in 2013 and 2014 and further improvement works completed in 2017. Sampling and testing of the RCC in 2019 indicated likely widespread zones of debonding and segregation and assessed lift joint shear strength (friction angle) of 39, allowing only residual unbonded shear strength (no cohesion).

Planning for an Essential Works project commenced in late 2019 to mitigate the risk. The essential work involved lowering the spillway to improve its stability under flood loading with an improvement to an estimated 1:5000 annual exceedance probability flood event.

The Queensland Dam Safety Regulator issued a change to the Dam conditions in March 2020 that required Sunwater to engage in activities to lower the primary spillway. In order to achieve this, Section 399B of the Water Supply (Safety and Reliability) Act (Act) was invoked requiring Sunwater to lower the full supply level for both practical construction and community safety reasons. The temporary full supply level is 42% of the original volume although the new crest is around 57% of the former volume of 300,000ML.

The key objective of the Essential Works and lowering the primary spillway was community safety and this has been a continual focus for the project team. Three collaborative emergency exercises have been held with local disaster groups, two sirens have been installed to provide additional warning communication channels for downstream communities, four separate revisions to the Sunwater Paradise Dam Emergency Action Plan have been made to reflect the changing risk profile as the project progressed. An ongoing community communications plan has also been implemented to ensure the community is educated and informed on the need for and status of the essential works and has opportunities to ask questions. The catchment is monitored daily for rainfall forecasts and the Bureau of Meteorology provide the team with weekly briefings.

Figure 3 shows the works in November 2020. The 2017 toe strengthening works are visible at the base of the spillway next to the left and right abutments. The shape of the old ogee crest is visible on the left abutment wall (marked by a dotted orange line) on Figure 4. Demolition methods involved mechanical removal and disposal using rubble chutes down the front of the spillway, with planned demolition zones and sequencing to minimise the impact of any overtopping. Upstream sections were the last to be demolished. Paradise Dam Essential Works project commenced in September 2019, with initial planning, design and lowering of the storage level. Lowering of the primary spillway commenced in May 2020 and removal of the crest and lowering was completed by September 2020. 600 passive anchors (shown in Figure 4) have since been added to the crest and concrete pours for a temporary cap were completed at the end of January 2021.

Ancillary works will continue at Paradise Dam through 2021. This will include final quality control activities, construction of a new improved fishway and placement of initial concrete works downstream of the dam to prepare for the next stage apron extension and provide some interim protection against scour.
Options are currently being assessed with Building Queensland to identify the longer-term DIP scope, including whether to raise the dam back to its original level with associated improvement works, or alternate improvement works allowing for a permanent reduction in the spillway crest level. This is being undertaken in conjunction with a long-term water demand assessment for the region, and an investigation into alternative water supply options. An options report and recommendation will be provided to the Queensland Government, which is expected to make a decision about the long-term future of Paradise Dam by the end of 2021. Following a decision, the continuation of DIP planning and implementation is anticipated to take a number of years to complete.

Procuring and completing a project of this magnitude, complexity and rarity has required effective engagement with local, State and Federal Governments, water users and the downstream community and has been assisted by extensive consultation with the project Technical Review Panel and additional international independent experts. In parallel Sunwater managed inputs to the Paradise Dam Commission of Inquiry announced by the State Government and significant changes to worker safety and procurement logistics resulting from the COVID-19 pandemic.